The Ins and Outs of the Wedding Shoe Game 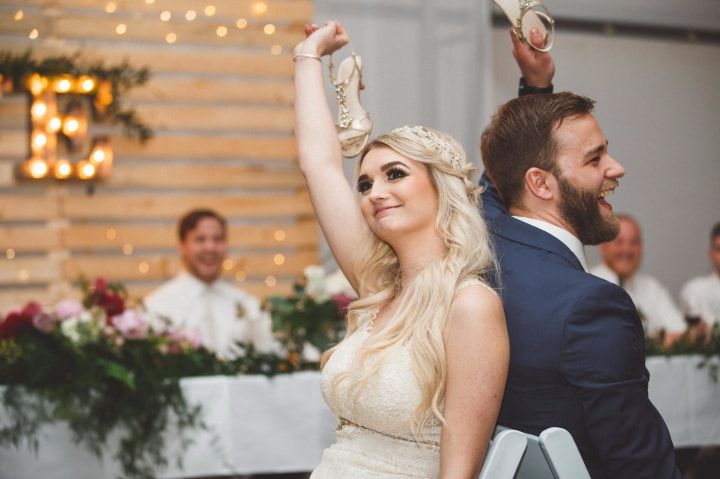 The first thing you might be asking is “What exactly is the wedding shoe game?!”

Well… The Wedding Shoe Game is an ever popular and fun reception activity that tests the newly wedded couple’s knowledge of each other. The newlyweds will have to answer a variety of questions without seeing one another’s answers. Questions tend to range from, who is the funniest to, who is the best cook, to who said I love you first?

The game is usually played when the meal is over and the toasts have been given, and  playing this game is a quick way to get guests into the party mood! Alternatively, if this is part of your wedding timeline, you could decide to play the game in between the band leaving and the DJ starting their set. Pick a time that best suits the flow of your party.

How to Play the Wedding Shoe Game

To get ready to play the Wedding Shoe Game, put two chairs back-to-back right in the center of the dance floor. The couple should then sit on the chairs so they can’t see one another. Then have both of them take off their shoes and swap one of them with their sweetheart, so that each person has one of their own shoes and one of their partner’s shoes.

Now it’s time to pick a game leader. This person may be a guest, the reception emcee or someone in the bridal party, such as the best man or the maid of honor. Having both sets of parents alternate questions can also be a fun addition to the game! Just make sure that whoever you choose is confident enough to speak in front of a crowd and has a loud voice (or mic experience!).

Now, here’s where the fun really starts! The host starts reading out questions about the couple one at a time. After each, the caller will leave a short (or dramatically long) pause, in which the couple can answer the question, the guests can react and the videographer can preserve the moment!

Because it’s the Wedding ‘Shoe’ game,  the couple doesn’t simply shout out answers! That would be too easy! Oh no, they raise the shoes in their hands instead to answer the questions. When a question is asked, they should raise the shoe of the person the question describes. For Example: “Who is more likely to cry during movies?” Both partners would then answer by raising either their own shoe (because their the big softy), or their partners (because they are).

If you want to play the Wedding Shoe Game, but aren’t sure where to start, we’ve compiled a list of possible questions for you. Typically the game host asks between 20-50 questions depending on how long you want the game to go, and the time you are filling in your reception schedule!